Something little, something sweet.

My helper is always the most caring so she already sent flower bouquet for my mum's birthday. What should I do?
No doubt, a bottle of wine. This has to be  little and decent as my mum is not a wine buddy.

Few tips on how to make the gift looked customized and decent:
1. Sweet, not too sweet
2. Small, woman like cute gifts
3. Decorations, I did buy a little wrapping to wrap it up
4. Easy to consume
5. Affordable

So a screwcap semi sweet half bottle Brown Brother Muscat becomes the choice. I bought some fancy accessories to wrap it like a necklace and here we go.

Honey, citrus peel and floral sweetness dominant wine. Simple and welcoming bouquet impressed mum easily. She loves it so much. I propose her to sip it daily when she is enjoying little Chinese dessert such as floral squares or biscuits.

Tasted by Unknown at 5:34 PM No comments: Recommend

Again, some old stories. Want to mention it as I so wanna buy it for next Wine class,
however the shop is under renovation, sad that I don't know where to get it.

2 years ago summer, was taking a family getaway trip to Napa Valley , where we once dined
in Bouchon - the 2 Michelin Star restuarant, for... night snack.
What a full scale of bookings that they are extending us to the night snack session starting at 10pm.
Yes, 10 pm. I recalled clearly we finished around 1am that night.

Food are not that decent, they can't be called a meal as it's just random dishes available.

So we ended up appreciate the oysters and Chardonnay pairing the most. Or this is just the effect of compare and contrast? Already too tired to tell. 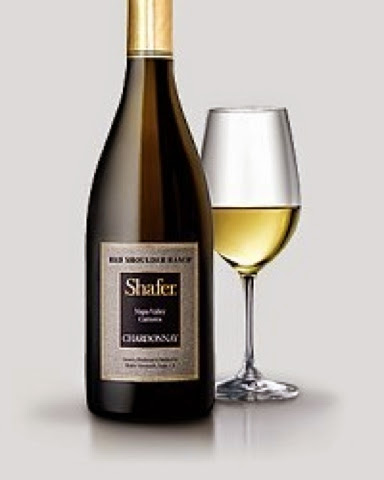 Deep gold colour, some tears after a swirl. Nose is full of pineapple and mineral, huge bouquet right below the nose. You can tell how full body this is. Typical American style.
Balanced acidity and med+ alcohol, creamy and stickiness on minerality, exotic fruits, vanilla and apricot note and oak surfaced. With such a long length that perfectly matches the mineral and creamy based oysters, it glimmered our night snack. Sparkles! Believe that's a good quality wine that can last for 8-10years.

Desperately looking for it when back in Hong Kong. Found one at a wine shop in Kowloon Bay $531 vintage 2008, however currently under shop renovation.
Anyone find this elsewhere? Please let me know thanks.

Tasted by Unknown at 5:31 PM No comments: Recommend

Sharing wine of the day via facebook, twitter, instalgram, whats app is almost a weekend must-do in my circle of friends.

Not only once I received pictures of Clinet. Clean and flat font of word printed onto the label. Simple and easy to recall.

Finally I had a chance to taste it, from an introduction to a new wine buddy.
I said "Long to drink this. It has been on my to-try list for a while." He then sighed with a wicked smile. "I did not bring the good year along, hope this won't devastate your image to it." This is a 2000 bottle, not a good year? 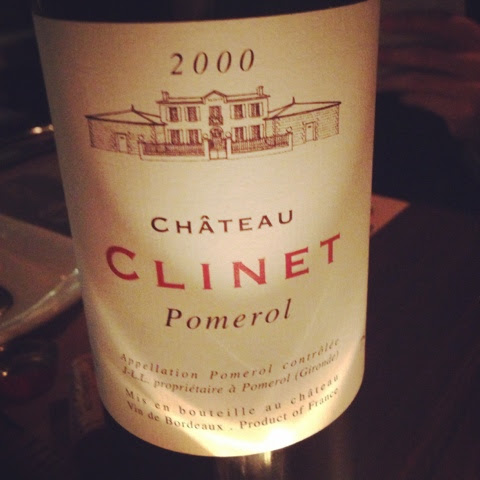 Velvet colour, with med tears.
Pungent on the nose red berries, merlot based, typical pomerol, hint of leathery and tar at the end.
Less strong in volume and thickness in palate than what is expected from the nose. Medium acidity and medium aftertaste. Softer and rounder body after opened an hour and some bitter chocolate with more plummy taste, yet the optimal didn't last. Harsher acid right after.

What is not favorable of Bordeaux is though they are very consistent in flavors, unless there is a change in winemaker, their output depends so much of the weather / terroir. In a good year, they have excellent potential for storage and marvelous quality, in a bad year, you get similar palette yet a lot weaker and drastic drop in quality after hours, sometimes even just in minutes. However what makes the 95T vintage 2000 pomerol a worse year for Clinet? 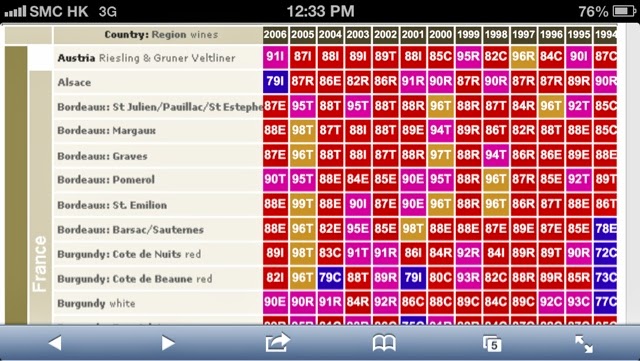 Let's reference the score. RP87, one of the worse year in the 2000s. Reading the history, that's because the chateau has switched its owners for several rounds while vintage 2000 was from Jean-Louis Laborde who owned from 1998 and died in a car accident in 2001. Until then the successor the industrious Ronan Laborde took over and expand Clinet further in 2012. No doubt that the 2000 vintage would be a struggled year to produce good wine. Guess things have been well now in Ronan's hand.

No offense, normally within same budget, I'd rather have something less famous, and something cheaper to surprise or impress myself. Or perhaps for this new friend who in fond of Italian wine tries to drive me away from big French to cuddle the big Italian~ yea, you actually made it, and I now understand why you wear the wicked smile.
Just that I never have been sticking to any country, I am an utopian on wine. Next time, just impress me with an Italian wine will do *wink*

Tasted by Unknown at 3:10 PM No comments: Recommend 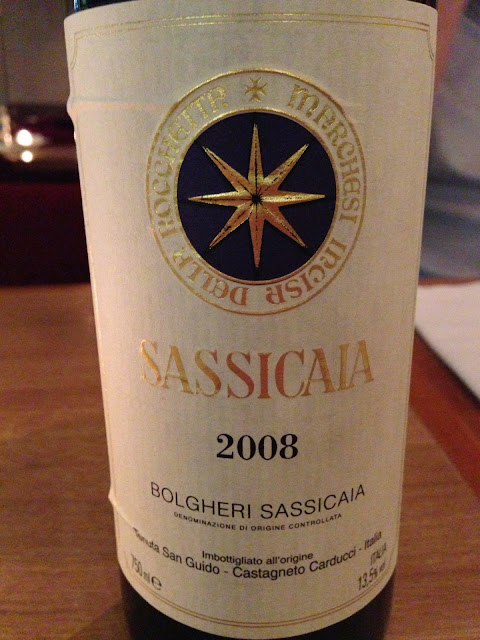 Tasted by Unknown at 9:43 AM No comments: Recommend

Wonder who this is?